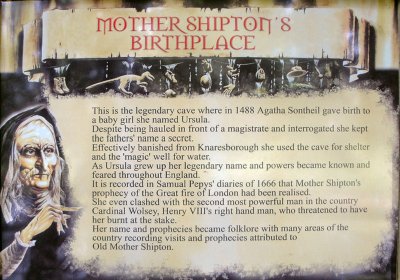 While many people may have heard of Nostradamus, we find that the French forecaster Mother Shipton or Ursula Sontheil of England was just as prophetic. Born in July 1488 in the town of Knaresbrough in England, she was handicapped and considered to be accursed.

We find that there are no actual details about the transformation that she took into becoming Mother Shipton. However, around the age of twenty-two she married Toby Shipton and shortly following that she could successfully predict the future.

Her very first prophecy that held importance was the one she gave after being given the name Mother Shipton. Essentially, she was suggesting that some English lions would end up on the Gaelic shore and the lily would simply wither away. In turn, the women where the lilies were from would shed tears and the English lion and royal eagle would be victorious.

This of course appears to be accurate as in the year 1513 Henry VIII, King of England ended up having 50,000 troops anchored on the Gaelic shore. The national flower of France is actually the lily. Maximillian at the time was called the royal eagle and with his help, Henry was victorious.
For her next prophecy, we find that she correctly predicted the League of Nations and United Nations Organization as well.

But while all this was going on, she predicted the most horrific vision of all. The atomic and hydrogen bombs that would come and she even touched on the fact of wars that would come as well. This included the cold war as well as several others.

Beyond this, she visualized other modern inventions as well. These included things such as the vehicles on the road, when she prophesized about coaches that drove without horses and that there would be a number of accidents that would be the results of them and people would feel sorrow from them as well.

She has prophesized more than 400 items and each of them was clear and precise.

In fact, she even saw the downfall of Cardinal Wolsey with startling accuracy.

Some will even agree that she has seen the future of technology as well, with telephones, television and other items that were beyond the realm of imagination for people at the time. This just further proves that this woman had a special gift that she was looking to share with the world and it has not gone unnoticed by any means.

In fact, she even was able to correctly predict when she would die a year before the events ended up occurring, making it one of her last and most somber predictions.